If everything is similar to a subroutine, then why use a function in excel VBA?

The fact is that, when you call a VBA function, you can send within the call of this VBA function some values or parameters and the VBA function will return a value or a set of values. Functions can return value or result unlike a subroutine which cannot return any values.

So, Subroutines are useful when you want to simply perform a certain task, but what if the resultant value of that task is needed by the calling function? This is where function comes to help.

For example you could create a VBA function that when you send a number between 1 and 26, could return the letter of the alphabet to which this number correspond.

For a function to return a value, the following two conditons must be satisfied.

1.The datatype of the value to be returned must be declared in the function header.

2.The variable holding the return value must have the same name as that of function.

This variable does not need to be declared.

The following example illustrates this

A look at the code editor is as follows: 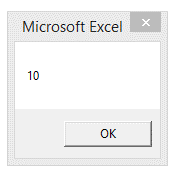 Observe that, the calculated value from the function is returned back to the sub and stored in the variable i.

1) How can worksheet functions be accessed in VBA?

2) How to format variable with VBA with the very useful format function. Define the number of decimal, the way a date is formated

4) What is variable scope in VBA, how do variable can be reach from other function or routines in VBA

6) How to modify strings in VBA, what are the functions you can manipulate strings with

9) How to use logical operators in VBA

10) What are the date and time function in Excel VBA