In the previous chapter, we saw what controls are and what are Form controls.

In this chapter, we will see the second type of controls supported by Excel.

The VBA ActiveX controls are loaded separately in the Excel.

The VBA ActiveX controls are built in the Windows framework and is purely based on Microsoft technology.

The VBA ActiveX controls are Microsoft Windows specific and may not work with other OS.

For example, an Excel workbook built with ActiveX controls might not work with Mac OS.

because, these controls are loaded not by the Excel, but by the OS, in which case, it will not work with Mac.

To use VBA ActiveX controls: 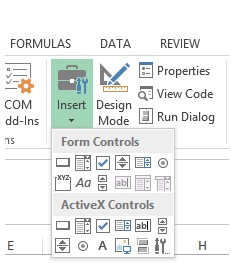 Drag and drop the control as needed.

So, whenever a workbook is to be used within Windows OS, ActiveX controls will do good.

2) How do I restrict user entry in ActiveX Text Box to just numeric values?

3) Here an explanation about buttons in VBA

5) How to control forms in Excel VBA

9) In Excel we use forms to interface with the user. Here some basics about GUI or graphical user interface

10) How can I prevent users from seeing / accessing my macro code?