A Subroutine is nothing but a piece of code that performs some specific task.

There are two important uses of subroutine in VBA programming which are:

When coding a large complex program, imagine what if you code the entire logic in a single subroutine?

In this case, it will be difficult to debug and fix errors or do modifications. So, breaking code into smaller subroutines will enhance the programming experience

What if you want to use a functionality repeatedly at various places in a your program?

In this case, It will be convinient to place that set of code in a separate subroutine and just calling that subroutine whenever needed, instead of repeating the same set of code at every place, where it is required.This feature is very helpful whlile programming.

It should also be noted that, there is a restriction on the size of a single subroutine in excel and hence subroutine is inevitable in larger programs.

The Subroutine can take arguments but does not return any value.This is most important thing with Subroutine.

The Output is as shown below 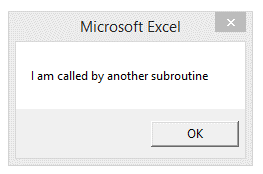 3) How to format variable with VBA with the very useful format function. Define the number of decimal, the way a date is formated

4) How to modify strings in VBA, what are the functions you can manipulate strings with

5) How can worksheet functions be accessed in VBA?

8) How to use logical operators in VBA

9) What is variable scope in VBA, how do variable can be reach from other function or routines in VBA