This control is used to give users, the facility to select more than one choice of interest.

This usually is used, when there is a need to choose more than one value.

This is generally seen in the websites while creating new accounts.

The checkbox is exact opposite to a optionbutton, where only one selection is possible.

For example, consider a case, when an application requires the user to select the sports of their interest.

The user may be interested in more than one sport.

In such cases, Checkbox is used, where the user can select as many as choices of his interest.

The checkbox has the same common properties as discussed in the previous chapters.

Some unique properties of checkbox are as listed below.

This property is used to set the position of the picture.

This property is used to specify whether the checkbox can support triple states.

This takes a True or False value.

The Change event is the most common event used with this control.

This event is triggered while Checking/Unchecking a checkbox.

The following code illustrates this:

Note that, for demo purpose, the first checkbox, "Cricket" alone is coded. 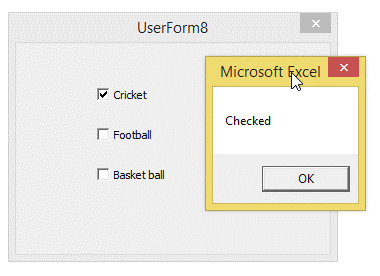 3) What are ActiveX controls in VBA. Here some good explanations

8) Here an explanation about buttons in VBA

10) How to control forms in Excel VBA